THE U.S. GOVERNMENT TO SELL THE FAMED 1933 DOUBLE EAGLE

THE MOST VALUABLE GOLD COIN IN THE WORLD

UNITED STATES MINT SELECTS SOTHEBY’S AND STACK’S TO SELL THE “FORBIDDEN FRUIT” OF THE COIN WORLD ON JULY 30, 2002 New York, NY – On July 30, 2002 Sotheby’s and Stack’s will offer for sale for the first time, on the behalf of the United States Government, the most valuable gold coin in the world, the fabled and elusive 1933 Double Eagle twenty dollar gold coin.

“This storied coin has been the center of international numismatic intrigue for more than seventy years, said Mint Director Henrietta Holsman Fore. “The Mint has certified the authenticity of this legendary 1933 Double Eagle. We will officially transfer full, legal ownership of the coin to the highest bidder at this historic sale.”

“We expect that this coin may become the most valuable coin in the world and one of the most sought-after rarities in history” said David Pickens, Associate Director, United States Mint.

David Redden, Vice Chairman of Sotheby’s, and Lawrence R. Stack, Managing Director of Stack’s, said, “The story of this coin is one of the great numismatic mysteries of all time whose final chapter will be written with this auction. Currently held at United States Gold Bullion Depository at Fort Knox, Kentucky, the coin has an intriguing history which includes seizure by the United States Government, a five-year trial with a landmark resolution and a possible connection to a royal Egyptian Collection dispersed in the 1950s. It is an enormous privilege to be asked by the United States Government to undertake the sale of the ‘Holy Grail’ of the coin collecting world.”

The twenty dollar gold coin, known as a Double Eagle, was a child of the California Gold Rush, and the massive shipments of ore sent back East. The first Double Eagles were issued to the public in 1850. 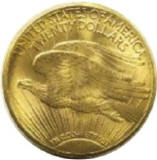 In 1907, at the behest of President Theodore Roosevelt, the denomination was radically redesigned by famed American sculptor Augustus Saint-Gaudens. These were struck until 1933 when production of the Double Eagle was discontinued along with all other United States gold coins as a result of Executive Order 6260 issued by President Franklin Roosevelt which, in an effort to aid the struggling American economy, prohibited banks from paying out gold. According to the United States Government, any Double Eagle struck in 1933 could not be legally owned, because none were officially released to the public. In early 1944, prior to the government’s discovery of the missing 1933 Double Eagles, the Royal Legation of Egypt presented a 1933 Twenty Dollar Double Eagle to the Treasury Department, seeking a license to export the coin to Egypt for King Farouk’s collection. The export license was required for virtually all gold coins under the extensive gold restrictions that had been in effect since March of 1933. Not yet recognizing the significance of an un-issued 1933 coin, the Department of the Treasury inadvertently issued the export license and the King Farouk specimen was exported out of the United States. Within weeks Government officials came to recognize the significance of the 1933 Double Eagle, and discovered the existence of nine other 1933 Double Eagles that illegally left the Mint without ever being issued. Over the next ten years, these nine 1933 Double Eagles were seized or voluntarily turned in to the Department of the Treasury, and were subsequently destroyed.

In 1954, a 1933 Double Eagle appeared at auction in Cairo, Egypt; Sotheby’s, acting on behalf of the new Republic of Egypt, was selling the astonishing collections assembled by the deposed King Farouk. King Farouk was one of the greatest coin collectors of all time, though it was not until this auction that the world learned of his remarkable achievement – the collection comprised more than 8,500 gold coins and the sale itself took nine days. Lot 185 in that auction contained a 1933 Double Eagle. Learning of the offering, the United States Treasury successfully requested that the coin be withdrawn from the sale. After this, the whereabouts of the coin remained a mystery for nearly half a century. It has been suggested, in sworn depositions, that the present coin is the King Farouk coin, and there is significant evidence that it was part of the famed collection, including the fact that no other 1933 Double Eagle is known to exist or has ever been identified.

The location of the present coin, since its minting in 1933, had been a mystery until 1996 when it was seized at the Waldorf-Astoria in New York as respected and leading British coin dealer, Stephen Fenton, attempted to sell it to Secret Service agents who were posing as coin collectors. The legal proceedings which lasted five years, ultimately resulting in a ground-breaking settlement which specifically allows this particular Double Eagle, nearly seventy years after its production, to be the only 1933 Double Eagle permitted to be privately owned.

Part of the intrigue surrounding the coin is the fact that it has existed in limbo for nearly seventy years. In the eyes of the United States Treasury, up until now, the coin has had no monetary value and its possession could result in a possible imprisonment. Associate Director Pickens confirmed, “upon auction the coin will be officially released for private ownership and it will become official U.S. coinage. At the sale, the final purchase price will be increased by $20, which will go to the United States Treasury General Fund. In other words, the United States Government will be “issuing” one 1933 Double Eagle for the first (and only) time at this historic sale.”

This sale represents a partnership of Sotheby’s, whose history of coin auctions stretches back to 1755, and Stack’s, an American numismatic firm whose first coin sale was held in 1935. Most recently, in October 2001, Sotheby’s and Stack’s worked together to sell the fabled Dallas Bank Collection for $7.8 million.